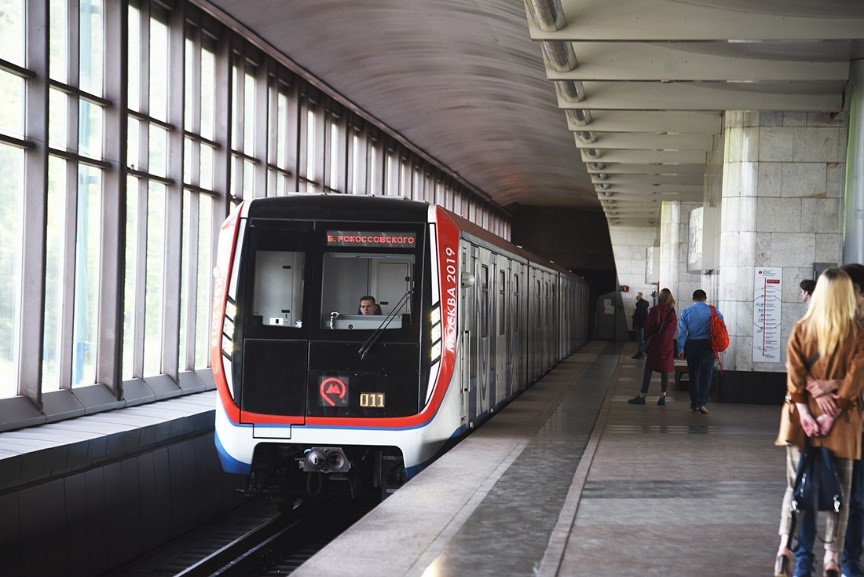 Moskva-2019 is the most modern modification of the Moskva train. During its development, the entire design of the exterior and the control cabin was changed; a different front for the head car was created. The interior of the passenger salons was modernized totally. A special wear-resistant and soft fabric material were used for the seats. The improved multimedia information system, increased dimensions of high-definition over-door monitors, new floor covering (it used to be monochromatic, now it is with hexagonal inserts in a different color) – these all were applied in the new train. The position of the handrails was changed - a hexagonal handrail was located between the doors of opposite sides, plastic handles are added. The salon was equipped with LED lamps that can change color depending on the time of day. The area of ​​the car's glazing was increased as well. The electrical equipment of the metro train and radio communication were optimized, which ensured uninterrupted communication between the driver and the operations control center. The driver's console was improved significantly. New generation trains have a reliable sound insulation system. "Moskva-2019" has passage through the whole train, which allows moving freely along the car and makes life much easier for passengers with luggage. For disabled passengers and parents with strollers, special seats are provided in the head cars.

One of the main technical innovations is the electrodynamic braking of the train to a complete stop without the use of a friction brake. The technology allows the train to slow down using electric motors, without using brake pads; as a result, the braking becomes smoother and quieter. The solutions used in the trains of the Moskva-2019 series make it possible to ensure the safest transportation of passengers and to constantly monitor the state of all metro train systems.

New trains can be seen on the Sokolnicheskaya, Kaluzhsko-Rizhskaya and Kozhukhovskaya lines of the Moscow metro.

In total, since 2017, 1 198 metro cars of various modifications of the "Moskva" have been manufactured and delivered for the Moscow metro.

Trains similar to "Moskva-2019" modifications are supplied to the Baku and Tashkent metros. In 2020, a new train will be produced for the youngest metro in Russia - Kazan.